Storage of grain and oily seed 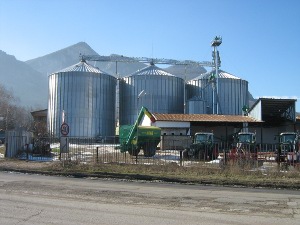 The specifics of the business of the two companies part of Agro Terra North group require the possessing of the needed storage facilities for the yielded agricultural products. In the period 2007-2008 all the necessary storage facilities for the agricultural production were bought or built. After reconstruction and expansion currently the total capacity of the facilities of the two companies amounts to approximately 18 000 tons of grain.

In 2008 “Remuss” Ltd. finished the construction of modern silos situated on the territory of the own agricultural base on the entrance of Vratza in Vasil Kanchov Str. 120.The total capacity of the three metallic and aluminium silos is 7 400 tons of grains, the total investment for which reached BGN 1 400 ths. The silos are constructed according to the latest technologies, equipped with the necessary ventilation systems, systems for temperature control, elevators, loading and unloading equipment, a sweeping machine and a drying room.